A champion is one that keeps going, even when it seems impossible. A tribute to the bold supporter, the Black Onyx stones are hand strung with the innovative My Arena Anfield 3taDium, forged in noble metals with the highest level of craftsmanship.

Like on the field, emotional and physical strength will help you rise. Onyx is the most ancient stone, known by the earliest civilizations for its powerful energy and wild natural beauty. Use the protective energy of Black Onyx to let go of your fears and create a stronger future.

My arena rocks. I’ve bought 4 bracelets from them, every time I’m blown away. Thank you guys for such an amazing company. 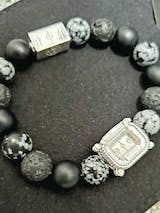 You guys are amazing. The quality is excellent

The My Arena 3taDium is an original representation of the iconic Anfield Stadium forged with noble metals and the highest level of craftsmanship.

Anfield Stadium has has been the home of Liverpool FC since their formation in 1892. With a capacity of 54,074 it the seventh largest football stadium in England. Sign up to get all the latest on sales, new releases and more…

Each bracelet is custom made for you, we recommend choosing the size that will fit snugly on your wrist.

How to measure your wrist

The easiest way is to use a tape measure, wrap it around your wrist and take note of the size where the tape crosses: If you don't have a tape measure: